Big skies, layout Ds, and full-field hucks get all the attention, but resets win games. Ultiworld's Reset Series starts by analyzing Pittsburgh’s breakside resets, one of the most unique reset systems in the college game.

February 12, 2014 by Cody Johnston and Kahyee Fong in Analysis with 18 comments

Big skies, layout Ds, and full-field hucks get all the attention, but resets win games. Teams that quickly change the angle of attack by moving the disc laterally put themselves in a position to be successful, while teams with stagnant resets are often forced into high-stall, low percentage throws. What separates great teams from the rest is their ability to not only dump and swing across the entire field, but to open up multiple new throwing lanes and gain yards while doing so.

The basic “primary handler cut strike, front of the stack fill backfield” reset system is easy for good handler defenders to predict and shut down, so top teams are finding new ways to reset the disc. Ultiworld’s Reset Series starts by analyzing Pittsburgh’s breakside resets, one of the most unique reset systems in the college game.

How Pittsburgh Sets Up Breakside Resets

As noted in their season preview, Pittsburgh loves using the breakside. Coach Nick Kaczmarek has consistently developed some of the best throwers in the college game and his system maximizes their abilities. During Pitt’s march through the 2013 College Championships, their reset spacing, timing, and use of angles were close to flawless.

Great ultimate doesn’t happen by accident and by looking at the progression of Pitt’s resets from fall and early spring tournaments, we can see all the pieces they put together at Nationals.

Most handlers intuitively set up their dump cuts parallel to the thrower on the breakside. If you’re on the force side, your man can poach the lane and take away open downfield options. But by standing on the breakside of a thrower, you and your defender take away space that can be otherwise used to break the mark.

Pittsburgh’s solution to this dilemma is always having their dump at 45 degrees back on the force side of the thrower. 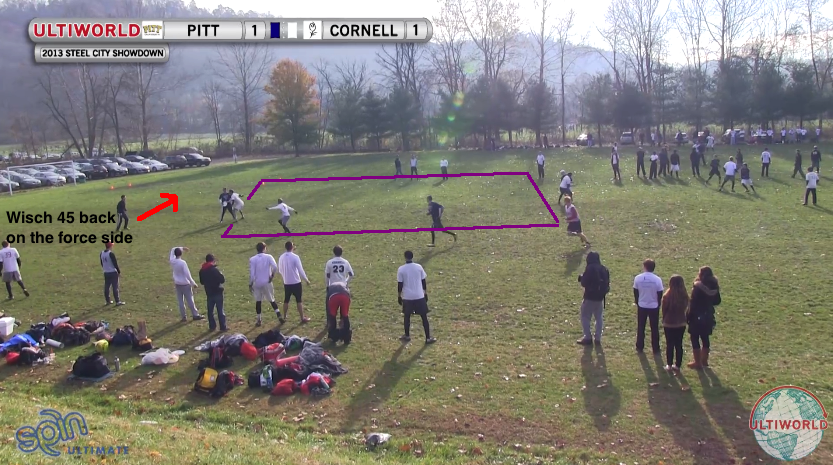 Keeping the dump off the breakside allows Pittsburgh to throw full extension around throws without worrying about breakside poaches. Always having that option available forces the mark to play honest, which creates even larger windows for inside breaks.

This is the foundation of Pitt’s reset system and a major part of Kaczmerak’s offensive philosophy. Looking at their game against Cornell from Steel City Showdown, you can see the younger Pitt handlers making a conscious effort to get in position and utilize this strategy. When Pitt’s more experienced throwers like Kunsa and Ranii-Dropcho have the disc, the benefit of this system is immediately recognizable.

Pitt spends the fall solidifying this foundation so in the spring they can add an entirely new dimension. Come springtime, Pitt still has a dump back at 45 degrees, but when the disc is on the breakside, they change their progression of looks during the stall count:

Pitt’s first step to building this progression is giving the thrower and the front of the stack plenty of room to work with. Like most teams, for the first 4 seconds of the stall count, they are looking mostly for cutters downfield. 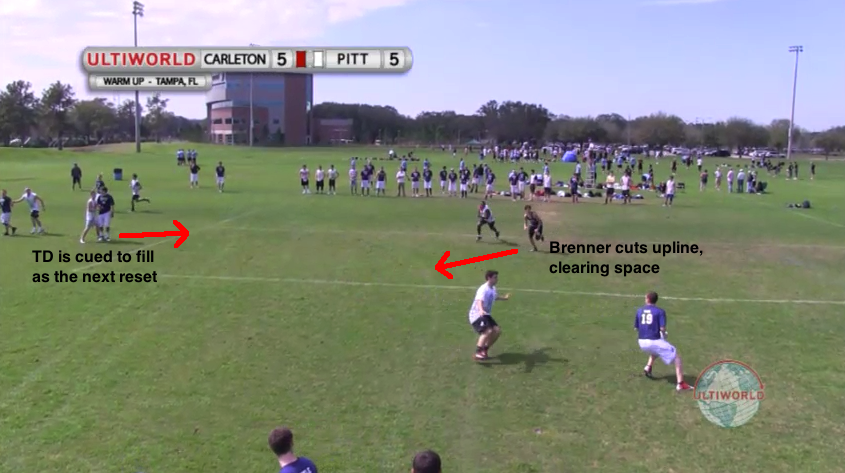 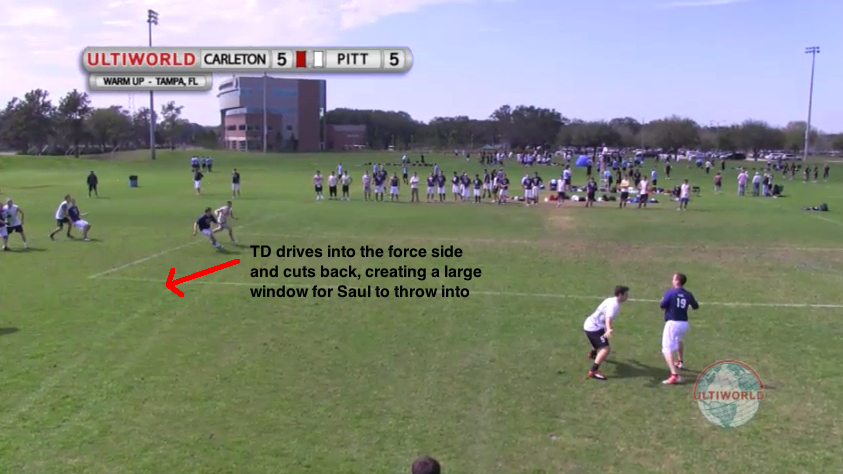 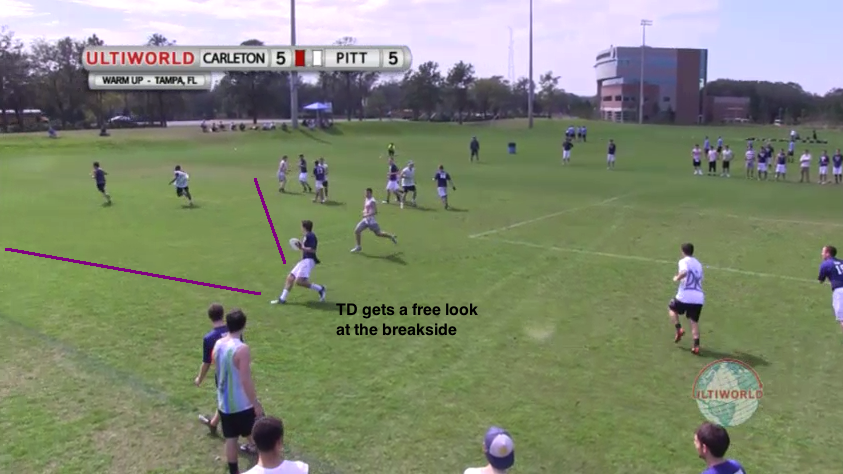 Everytime Pitt catches an upfield pass on the breakside, they create a structured opportunity to hit continuation cuts with either an around or inside throw. In the image progression above, notice how much separation Degirolamo has from his mark and the resulting break throw window. As the mark sprints to catch up, Degirolamo has the option to throw the around, or fake and hit the inside break when the mark overpursues.

Pittsburgh starts connecting these breakside strikes with downfield cuts just two weeks later at Stanford Invite. Here’s a preview of what the final product starts to look like from Pitt’s pool play game against UNC:

To anyone outside Pittsburgh’s system, Thorne’s initial dump cut appears to be a poor one because he crowds the thrower and doesn’t gain any yards.

However, this cut is a deliberate effort by Thorne to keep the disc on the breakside, allowing Pitt to continue running their preferred style of offense.

When Saul gets the disc, notice Degirolamo drive his man into the force side like he wants the continuation. He then has a full three steps on his defender for the open side throw, but Saul stays patient. Degirolamo slashes back to the breakside for an upline cut. From there he has a free continuation look on the breakside, and capitalizes with an around flick to Christian Pitts for the score.

By the time Pittsburgh reached Madison last May, the spacing, timing, and fundamentals of Kaczmarek’s reset system were all in place. In the clip below from the Oregon Pitt semifinal, notice the deliberate spacing from Pitt’s D line.

Watch the trust Kauffman has when he flips a high release backhand out into space for Watson to initiate the offense:

Watson immediately hits an inside continuation throw to Beardsley coming underneath. Beardsley initiates with the backfield dump, the mark overpursues, allowing him to pivot and hit another breakside continuation.

Then, when Watson receives the backfield dump at 0:10, notice how he makes a strong effort to fake both the around backhand and the inside flick. This fundamental moves the mark and shows downfield cutters possible throwing lanes where they could have been.

Finally, when Pitt can’t throw a breakside strike, by moving the dump back to 45, they are free to attack the entire open side. 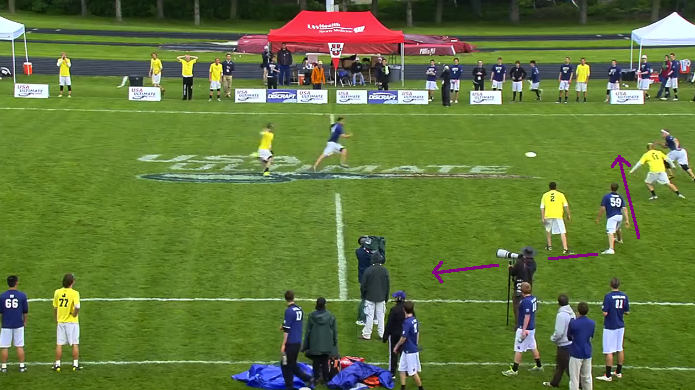 Hitting breakside strikes is not unique to Pittsburgh, but the structure and understanding Kaczmarek has built in his players and system is one of a kind. It’s easy to talk about the losses of Thorne and Degirolamo, but Pitt also lost three of its top handlers in Saul, Brenner, and Kauffman. Saul and Brenner spent four years working under Kaczmarek and Kauffman spent five.

This spring, the challenge for Pittsburgh is building patience and trust in the young players who they ask to step into more important roles in their reset system. The challenge for every other top team will be learning to defend against it.