May 21, 2014 by Cody Johnston and Kahyee Fong in Analysis, Video with 7 comments

Spacing is one thing that defines most great offenses. If you watch teams with good spacing, you’ll see every player engaged, knowing when to be aggressive and when to hold space. A team with a mature understanding of spacing will understand who they want using space — and why. And they’ll know where to move and how to adjust when their first option is taken away.

One lesser-known offensive set is the 3-2 split stack. But the 3-2 can be an effective base offensive formation for teams concerned about efficient spacing. The 2014 Atlantic Coast and Southeast regional champions — UNC-Wilmington and Florida, respectively — utilize the 3-2 split stack to isolate stars and score efficiently.

Breaking down these two college teams, as well as GOAT, shows us how three great programs isolate matchups, maximize space, and force defenders to make tough choices. Every team (but especially college teams) have a core of star players they rely on. For top-heavy teams, efficiency for those star players is just as important as the score.

Florida coach Cyle Van Auken has three star players in Jason Silverman, James Dahl, and Bobby Ley along with a group of athletic and disciplined cutters. Van Auken has ingrained in every player an understanding of their role, including the how and why, plus the necessary fundamentals to execute that role.

Conservation of energy for the Big 3 at Florida is always an issue, because the team runs a historically tight rotation. Quick points mean less energy expended, so two huge questions for Van Auken are how to best utilize these three players and how to use them to get other players engaged and contributing.

Florida uses a variety of offensive looks to create motion off the pul. One way they keep the stall count low is the 3-2 split stack: 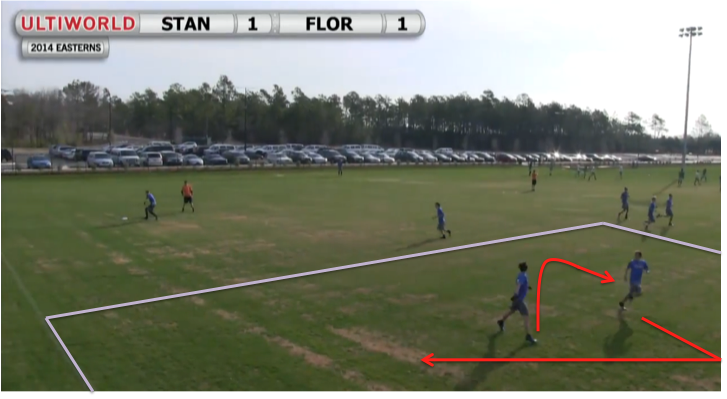 By keeping three cutters all the way on the far sideline, Florida creates a huge lane for Silverman and Ley to work in. Silverman initiates the offense by slashing across the the middle of the field while Ley pulls his man deep. The slash cut opens up space for Ley underneath and puts Silverman in a great position to attack deep.

After the pull is centered, the disc goes from Dahl to Ley to Silverman. Florida’s efficiency is grounded in their ability to play three-man ultimate. Coach Van Auken utilizes the 3-2 split stack to isolate those three, take high percentage deep shots, and set Florida up for sustained success over the course of a game.

Bobby Ley and Jason Silverman are Florida’s most dynamic handlers. But Van Auken moving them downfield early in games forces defenders to play honest and loosens the defense when they move back behind the disc in later points.

What makes this game especially interesting is that Stanford coach Jordan Jeffrey recognized Florida’s isolation strategy early in the game. Stanford made adjustments and threw zone, poaches, and active downfield switching to force Florida out of their comfort zone.

Check out Stanford’s adjustment and Florida’s reaction on their next O point:

Stanford does an excellent job shutting down Florida’s primary options, forcing them to reset. Notice how quickly Silverman moves from deep space to demanding the disc underneath. Silverman catches the under and every Florida player follows suit, understanding the transition into their standard offense.

Florida’s role players know how to read motion, when to wait, and when to go.

Florida’s cutters clear hard to the vert stack leaving Silverman with the disc, Dahl at the front, and Ley as another option backfield. Jacob Dummeldinger (#11) anticipates Silverman’s IO backhand break to Dahl, lures his defender underneath, and burns deep for the goal.

By using the 3-2 split stack, Florida can comfortably isolate two of their stars downfield. They know that if the play breaks down they can quickly move to their standard 3-man vert game.

UNC-Wilmington is another program that uses the 3-2 split stack to efficiently conserve energy for their top players.

By looking back to QCTU in February, we can see the understanding and chemistry the top players on Wilmington have together:

In the first clip Trueman Nottingham and Robert Goode are isolated in the 3-2 split stack, unsurprising given Nottingham’s superb hucks and Goode’s athleticism.

In the second clip, the initial set play is broken up by a smart poach, but notice how the resting cutters react: 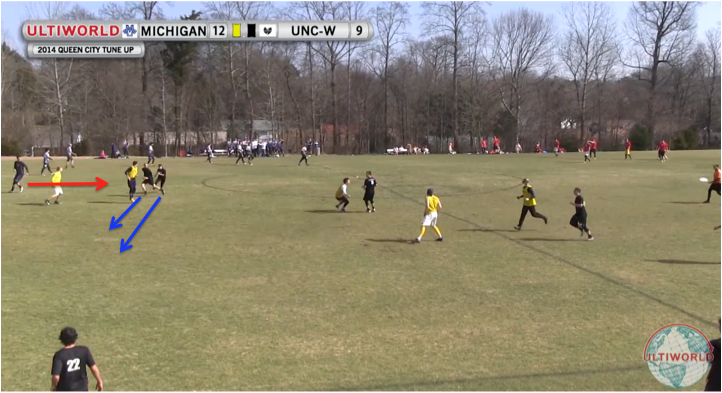 Despite the Michigan poach, Luke Hancock breaks to Nottingham in the middle of the field. The front two cutters clear hard to the center, opening space for Ross Anthony underneath.

The front two cutter’s movement to the middle of the field is a deliberate play, designed to get the disc all the way to the break sideline. After the transition to vert, every player’s hips are facing the breakside. With the exception of one force side cut, every downfield look is on the breakside.

All good teams use the breakside, but Wilmington’s understanding of spacing and ability to attack the mark are big parts of their success so far this season.

The team I’ve seen with the most efficient 3-2 split stack currently in men’s ultimate is Toronto GOAT. GOAT not only isolates their stars in space, but is able to create 3 different options all in the same stall count.

At the Pro Flight Finale last season, GOAT was plagued by injuries yet won the tournament with a 15 person roster. GOAT’s offensive line was excellent, keeping the throw count low and maximizing rest for their stars.

Check out this pull play against Doublewide in the finals:

Karl Loiseau’s initial slash across the middle of the field (not shown in the progression below) is similar to how Florida and Wilmington initiate their offense. After the first cut, things get a little different.

Check out the small adjustments that make a big difference for GOAT: 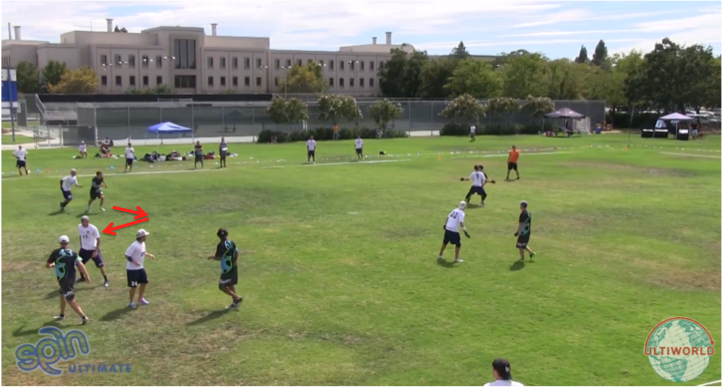 Loiseau clears space and Lindquist cuts towards the middle of the field for an inside break. Rather than coming straight under and receiving a pass close to the trap sideline, Lindquist aims towards the center of the field. If he receives the inside break, Loiseau is in a great position to make a huge continuation cut. In this clip, Lindquist recognizes the break isn’t available and busts deep. 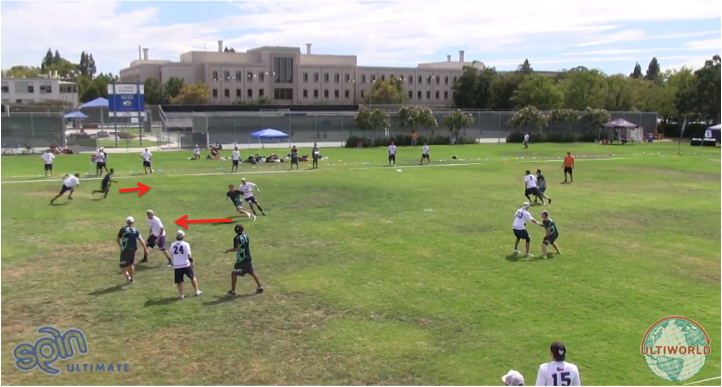 Loiseau reads Lindquist’s motion and immediately comes back underneath for a big gainer to start the offense. As Loiseau receives the disc, Lindquist initiates his deep cut even with the disc, putting his defender in an incredibly tough spot. 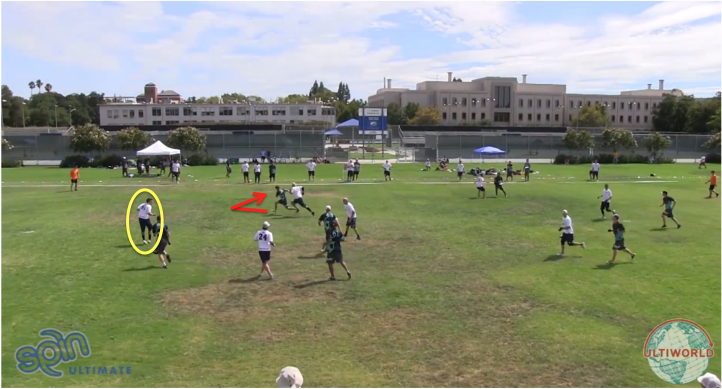 Tyler Degirolamo smartly drifts off his man at the back of the stack, but it’s still not enough to slow down the offense. GOAT’s spacing forces Degirolamo to choose between taking 3-5 more steps into the deep space and calling a potential switch or remaining close to his man and trusting his teammate to play defense on an island.

If Degirolamo jumps into the deep lane and the switch is not communicated quickly, Aaron Neal gets an uncontested under from the back of the stack. If Degirolamo stays close to his man, his teammate is forced to defend Lindquist starting a cut from even with the disc.

Great offenses force defenders to make choices and the longer the choices take, the quicker the offense scores.

Florida, UNC-Wilmington, and GOAT are excellent at isolating their stars and forcing defenders to make choices. The 3-2 split stack serves as a starting point and helps generate extra isolation space, even compared to some other offensive sets. But what’s most impressive isn’t the specific formation or play, but rather these great teams’ ability to read the field and improvise once the initial action breaks down.