Past Articles from Scott Dunham 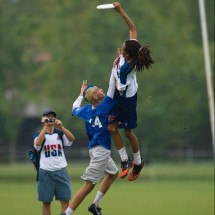 Scott Dunham (also known as @Hallies_Dad) is a professor of Electrical Engineering at the University of Washington in Seattle. He recalls playing a game that resembled ultimate on the Stanford CroMem lawn in the early 80’s and took it up again around 2001 after moving to Seattle. These days, he plays pick-up around town and cheers on his daughter’s teams (and those of her former teammates)